Next: Lessons of fascism Up: Hacked Inhabitants Docs


Degenerate Art: An architecture of respect and retreat

Designed by William Pereira in the 1960s and expanded by New York architects Hardy Holzman Pfeiffer Associates in the early 1980s, the Los Angeles County Museum of Art is prominently situated on Wilshire Boulevard, competing as an edifice and cultural institution with Arata Isozaki's Museum of Modern Art downtown. The complex is described by Los Angeles historian Mike Davis as a product of the desire of new (and mostly Jewish) money to legitimize itself on its own turf.

"As if to precisely counterbalance the Music Center's pretensions to anchor Culture securely in Downtown, LACMA, heavily endowed by the Ahmansons and other Westside patrons, opened a few months later in the Jewish Hancock Park area. Since the late 1940s the Westside had been staking claims for a distinctive cultural identity beyond mere affinity with Hollywood."

As part of its search for 'distinctive identity,' LACMA has in recent years mounted shows of social conscience and controversy, the latest being Degenerate Art: The Fate of the Avant-Garde in Nazi Germany. Curated by Stephanie Barron, its gala opening in February, 1991, was attended by none other than Madonna. The show contained 175 of the 650 objects originally exhibited in Munich. The catalog, edited by the curator, attempts to draw parallels between events in Nazi Germany and the latest manifestation of artist-bashing in the United States, led by Senator Jesse Helms.

Robert Darnton, writing in the New Republic, criticizes the exhibit as "strangely out of place in Los Angeles." I would disagree, arguing that Los Angeles became the center of the emigre artist community in the United States during and following the war, a haven for those who were rejected by the Nazis, or those who feared for their careers and lives. Los Angeles has been and continues to be a center of avant- garde art and architecture, the LACMA building itself being the subject of ongoing critical controversy. Finally, the exhibit was designed by local architect Frank Gehry, known for his unconventional partis and dissonant juxtapositions of materials, an artist who might well have been labeled "degenerate" by the Nazis. 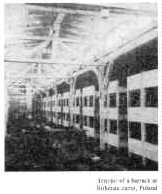 Several critics of the exhibit have expressed discomfort, if not disagreement, with the "parallel" theory, and Gehry expresses this ambivalence of purpose by using an overly subtle display format. The designers of the original Entartete Kunst chose to create a grotesque setting to reinforce what they considered grotesque art. Paintings were hung, intentionally tilted, against walls defaced by insulting rhetoric -- a device obviously intended to titillate a curious public. By contrast, paintings in the 1991 version were hung in an orderly. respectful way against white, unadorned walls. Three-dimensional pieces were supported on substantial Mission-style wood constructions reminiscent of the rough furniture constructed by death camp inmates. Photographs of the original exhibit were mounted on the walls to provide the historical context. What was missing was one of the stated intents of the show: to graphically represent the parallel -- not the difference -- between then and now. This might have been accomplished by the inclusion of works by contemporary artists considered obscene or degenerate. With LACMA not having taken such a polemical stand, it is not surprising, Darnton observes. that "the pictures look incapable of giving offense." 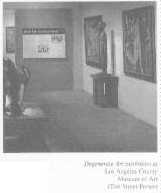 Davis provides perhaps the most incisive explanation as to why Gehry was chosen as architect of the exhibit:

"(Gehry's) portfolio is ... a mercenary celebration of bourgeois-decadent minimalism. With sometimes chilling luminosity, his work clarifies the underlying relations of repression, surveillance and exclusion that characterize the fragmented, paranoid spatiality towards which LA seems to aspire."

Gehry's modernism, then, becomes a dialectic between relentless, cynical critique of society. and service to his 'enlightened' capitalist patrons as the "human face of the corporate architecture that is transforming Los Angeles." His exhibit design for The Avant-Garde in Russia 1910-1930 (mounted at LACMA in 1980) confirms his ability to respond boldly and sympathetically to a given theme. Yet, in this sanitized design Gehry plays it safe, perhaps not wanting to offend Holocaust sensibilities, perhaps not daring to challenge the idea that 'it couldn't happen here.' By not taking a direct offensive against contemporary critics of the arts, the exhibit has the effect of disarming and pacifying its viewers. By its deflection of criticism and the blurring of issues, its ends are remarkably similar to the Whittle project, though its stylistic means are different.