Next: Fax from Leon Krier to Professor Kaplan Up: Hacked Inhabitants Docs 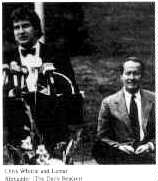 Since this essay was conceived, there has been an array of remarkable events related to its theses. HRH The Prince of Wales has established an architecture school in London based on the principles set out in A Vision of Britain, blurring the philosophical boundaries between populism and elitism, evoking themes of the fascist past. The Whittle empire has collapsed financially, its pieces sold individually to the highest bidders. In a eulogy written in The New York Times, Whittle's former media relations director, Gary Belis, stated that, "Even inside the company, you were always trying to get a handle on what was real and what wasn't." Channel One was bought by K-III Communications Corporation, amid protests by educators that it was a destructive influence in the schools. It continues to function. The Edison Project remains under the guidance of Benno C. Schmidt, Jr., although Chris Whittle has been removed as its chairman. The idea of privatized schools awaits a political climate more sympathetic to its aim of for-profit management of public education. Lamar Alexander, one of its outspoken advocates, has announced his candidacy for President of the United States, urging conservative activists to deal with "that little intellectual elite" in Washington. While referring specifically to the current administration, he uses populist language that has broad and chilling implications.

Of the pieces of the empire, the Whittle headquarters building has perhaps come to the most ironic fate: it has been sold (at a supposed bargain-basement price) to the federal government for remodeling into a new federal courthouse. The same forces that favor the reduction of big government, the privatization of public assets and the "free" operation of market forces, are quick to advocate the transfer of private liabilities to the public domain through legitimized salvage operations and direct subsidies.

While the building has changed hands, the values of power and capital that created it remain very much alive, and move freely and conveniently between private and public sectors as necessary or desired. The consolidation of power that transcends private or public boundaries depends on the marginalization of its critics for its success. Artists, traditionally among the avant-garde of the criticized, are once again finding themselves in a compromised and dangerous position. Shifts in the political spectrum have threatened the reduction or elimination of federal funding of the arts. This will not end art, but it will surely infringe on its autonomy and thereby serve to hush some of society's most persistent, strident and needed critics.

Michael Kaplan is Associate Professor of Architecture at the University of Tennessee in Knoxville. He lectures and writes on social, political and cultural aspects of design. This essay is adapted from a presentation given at FASCISM[S]: Roots/Extensions/Replays, an interdisciplinary graduate student conference held at The University of Oregon in April 1992. E-mail: mkaplan@utkux.utcc.utk.edu.